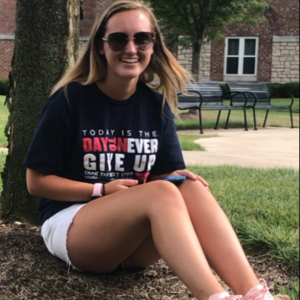 More Than A Number

I was a senior in high school only two years ago and though I’ve forgotten a lot of things about what the application process is like, there are many things I still remember. One of them being stressing over the numbers that were destined to define me as I tried to get into college.

In the spring of my junior year, I took the ACT for the first time and received a score I was not happy with at all. I knew I wasn’t going to get into the schools I wanted to with that score. However, since I took it so early, I had the summer before senior year to study for it and I also had time to take an ACT Prep Class at my high school before taking it again in the fall of my senior year. Many people told me that having a class like that on my transcript was going to make me look dumb, but I traded that chance in for getting a better score because of how much people told me my numbers mattered.

While I was stressing about taking my ACT again, this time being the last because they only gave me two fee waivers, I was also stressing about getting my GPA high enough for colleges to like me. I remember staying up until two or three in the morning after working at night, and then waking up at six in the morning to get to school. There was not a day I wasn’t emailing or meeting with my guidance counselor to get into college. I worried so much about my numbers that I had burned out and got to a point where I didn’t want to go to college anymore.

Since no one in my family had experienced going to college before, no one knew what the ACT was even like or what the process was for applying to college. I was in it alone with my guidance counselors, high school teachers, and peers. It was crazy.

When I shared that I didn’t want to go to college anymore, my guidance counselor turned around in her chair and reached into a cabinet. She turned back around with a folder in her hand full of college pamphlets and printed materials, with my name written across the top. She told me that if she believed in me, I had to believe in me, and in that moment she handed me a paper with “Flyer Promise” written across the top of it. That paper changed my life.

After I talked with people at my high school about this new program at the University of Dayton, I was reminded that I already had those scores and GPA that they wanted–even if I didn’t, I was still going to be interviewed because my experiences mattered more than my numbers on my transcripts. That was almost two years ago today, when I was handed my acceptance and welcomed to the University of Dayton.

Regardless of whether or not Flyer Promise would’ve happened to me if I wasn’t in that time or place, I almost lost my education because I focused so much on what those numbers meant for colleges. The truth is that though the numbers might mean a little bit, they’re not everything. You are not the numbers written on your transcript. As you continue either applying to colleges or waiting for decisions to come back, continually remind yourself of the goodness that exists beyond the paper.

Remind yourself that your personal statement, recommendations, and overall experiences in life thus far mean so much more. You are so much more than a number.